This will be the first game back at the Garden for Dubinsky and Anisimov against their old team, minus Gaborik. And this will be Rick Nash’s first crack at playing his former club where he was their franchise player as well as captain for many years. Nash was sidelined with a concussion when the Rangers played Columbus in Ohio. I for sure marked on my calendar that when Columbus rolls into town to play the ‘soft ass baby shit Rangers’ that Gaborik would most likely have a hattrick but in typical ‘Rik fashion, he’s hurt, again. So we won’t hear Joe Tolleson say this tonight:

“Columbus goal his third of the game and 21st of the season scored by number 10 Marian Gaborik. Assisted by number 17 Brandon Dubinsky and number 42 Artem Anisimov. Time of the goal 8:32. That’s Gaborik from Dubinsky and Anisimov at 8:32.”

As we all know Derek Stepan and the New York Rangers have reached a deal after a too long of a stalemate. Drove me crazy because the Rangers needed this guy in camp since day one, but whatever it’s over and done with. Right now I’m gonna give you the scenario in how the deal probably went down. 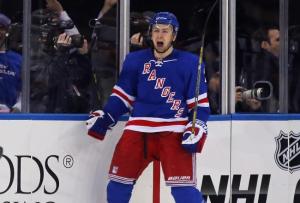 Glen was sick and tired of Derek partying too hard and chillin with multiple chicks on the reg not focusing on the hockey. Derek was spendin too much time listenin to his agent and not himself. You don’t need ears to listen to yourself Derek. So Glen got fed up, went to Derek’s house with a contract and Glen’s word that he’ll sign him to a long term extension during the season. This is a re enactment of Glen goin to Derek’s house to get the deal done:

Obviously that’s a clip from the 1987 classic SciFi film ‘RoboCop’. It would be borderline outrageous if that’s what happened though. Tonight the Rangers face off against Torts and the VanCity ‘Nucks. We’ll see what distasteful words John has to say in his pre and post game interviews. Cheers.