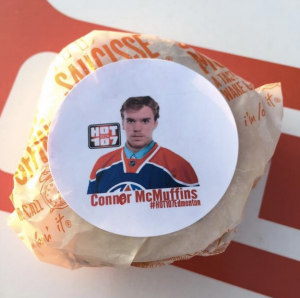 I guess it’s good Burger King purchased Tim Horton’s ‘cuz no way in hell they’d survive as a corporate entity in Canada now that Edmonton won the first overall pick YET A-FUCKIN-GAIN and will no doubt take Connor McDavid.  Obvious cross promotion for at least the next 15 years that apparently they’re already unabashedly jumping on, proper spelling be damned.  If Connor is half as good as advertised you’re lookin at basically a monsoon of McMuffins raining from the crowd in western Canada that’ll make the Hamm-burglar’s presence in Ottawa look like a minor drizzle of burgers.