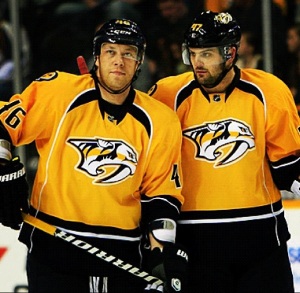 ‘Former Nashville Predators winger Alexander Radulov is disputing the reported events that led to his team suspension prior to Game 3 of the club’s Western Conference semifinal matchup against the Phoenix Coyotes two seasons ago.At the time, reports claimed Radulov and teammate Andrei Kostitsyn were seen out and about in Scottsdale, Ariz., well into the morning.

But in an interview with KHL.ru over the weekend, the 27-year-old Radulov disputed the entire thing. “Not true,” Radulov started. “Do you want to know what happened? We were in Phoenix and the only places to go out and eat were on the other side of town from our hotel. “Almost the entire team went to this restaurant, and some left early, but I arrived back fifteen minutes after curfew, so it was a breach of the rules, you could say, but it was nothing like some people claimed.”

In reply to accusations he was drunk the night before Game 2, Radulov said he stayed dry that night. “I said to them at the time, ‘Come on, I’ll do the tests and they’ll show that I haven’t even had a glass of beer, and you can even take a blood sample.’

Rads you got a big mouth bro. You play alot like Zherdev, when you don’t wanna play you straight up don’t try. I watched you play game 2, you weren’t that sharp. Your buddy AK-46 (Andrei Kostitsyn) played better than you.

Also: There were multiple reports and eyewitnesses that saw you and Kostitsyn out til like 4-5 AM. Taking a page outta Fleury’s book well played. All I wanna know is you Russians you know how to party and what better would it be if you guys didn’t do it this way?