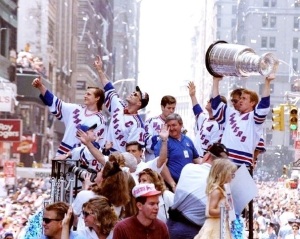 This photo, blown up and from a different angle, hangs on the wall in my garage.  I pass it as I enter and leave the house each day.

I woke up early as a 3rd grader on Friday, June 17th 1994 ready to go, except I didn’t have my OLV school uniform on, I was set to go to the first Stanley Cup Championship parade in Rangers’ and New York history.  My dad didn’t take the day off, and I had to go to school.  It’s still something he regrets to this day.

In the time that has passed since, not a single day has gone by that I haven’t dreamed and contemplated what another Stanley Cup would be like.  As big a Rangers fan as I was back then, there’s no way as a 9 year old I could have fully appreciated the gravitas that was the first championship in over half a century.  I never really endured derisive chants hurled my way of “1940.”  What I was instead forced to live through was the reign of the Devils, and the agony that through the late 90’s and into the early 2000’s the disarray that was the Rangers.  It was beyond agonizing.  To be here on the verge of seeing the Rangers play for Lord Stanley’s chalice is so surreal it’s hard to put into words.  It still hasn’t hit me that it legitimately could happen again.  Trapp said it best, “its like wanting so bad to do something for 20 years, and when you’re finally allowed to, you have no idea what to do.”

Two decades later I need this parade to happen to fill that void.  I’ve lived and died with this organization every single step of the way.  Should they win I’ll probably wake my dad up again on parade day despite being nearly 30 just for the significance of it.  It’s about damn time we ventured to the Canyon of Heroes.