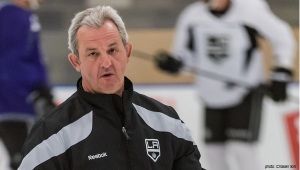 Slap Shots has been told by two sources that the Kings locked the door to their locker room following a defeat on the road within the last two weeks so that Sutter could not get in and deliver what the players apparently expected to be another in a series of lectures/tirades.

As the tale was told, after Sutter finally tracked down an arena operative to unlock the door, he was greeted by three heavy waste receptacles lined up as a barricade to what had become an empty room.

Thus, it would be no stretch to suggest tension between the team and the coach, who led the Kings to those two Cups, was a significant issue as L.A. went down the stretch before their elimination Thursday night in Calgary following a shocking defeat two nights earlier in Edmonton, of all places.

Waaaaiiiit hold up, you mean to tell me the Kings grew tired of hearing this guy talk? :

Mumbles McGavin over here.  Three years with 2 Cup wins and a trip to the western finals sandwiched in the middle there is probably WAY too much time to have to work under a dude like this as a player.  Richards was probably elated to go for a ride on the busses in Manchester for that period of time just to get away.  Sutter’s face alone sucks, he looks like that type of grandpa you hate.  Ton’s of Canadian personality just oozing outta this guy.

Despite the fall from grace this season (that literally EVERYONE is glad to see) he’ll keep his job ‘cuz you can’t can a guy with the type of resume/success he’s had in that small a sample size but his shelf life isn’t for the long.