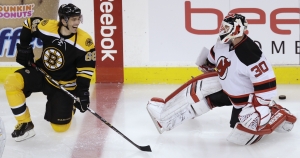 Well the weirdo legend finally found a home for the next year as Louie Lam inked the sure-fire hall of famer to a deal that puts Jagr in red and black and in the shittiest city other than Detroit.
I’d say im suprised that Lou would go for a past his prime scorer but hell he had to do something to attempt to replace Kovy (probably not possible). Word was that Jaromir was in the area last Friday meeting with the Devils Rangers and Flyers which makes sense cuz all three teams are within driving distances of casinos (dude fuckin LOVES gambling). No chance Rangers were bringin him back since they legit have no cap space and the Flyers at some point may wanna divert their funds to defensemen. Prob would be a good idea.
As much as its been clear that Jagr is probably the most blatant mercenary athlete in NHL history at this point, its still gonna suck to see him with a damn Devils crest on his chest next season. Whatever good luck tryin to get production outta him in the playoffs if you make it there, New Jersey. Just look down the ‘pike and ask the dudes in orange how he fared for them in ’12.

P.S. if Lou didn’t greet Jagr at the Pru center like Sean Connery then he should be banned from the NHL for life.