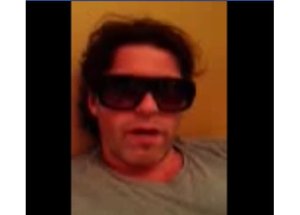 Jaromir Jagr does whatever the fuck he wants. From drivin 200 mph, to gambling everywhere he can, to signing with the Flyers instead of Montreal or Pittsburgh in 2011, and makin delicious peanut butter, the fuckin guy is a GEM. All that plus dopest hands in the history of the game hands down end of debate that wasn’t even a debate and speed and the fact that he basically resurrected the Rangers in 2006 are reasons why hes one of my favorites ever.
The pic above is a screen cap of a video he posted on his official Facebook page the other day of him speaking in Czech and rockin enormous shades for no reason all for the purpose of informing the masses that his next stop in his career would be announced today. We’l soon find out I guess but for now just bask in the friggen weird glory that is Jagr.